Wimbledon 2016 is well and truly underway. It’s the event in the British calendar that makes us all suddenly have a new-found interest in tennis. We all stock up on Pimm’s, strawberries and cream, and anything else that symbolises Britain to enjoy this summer sport.

Did you know though that during the whole 2 weeks, The Championship gets through…

Wimbledon is an event that we all get behind and this year Lucy was lucky enough to get Centre Court tickets:

Having applied months ago through the ballot for tickets, I was lucky enough to get 2 Centre Court tickets for the 1st day of Wimbledon, Monday 27th June. Having made our way to Southfields on the District Line we arrived to a packed station with everyone pushing their way to get through the barriers – luckily the sun was shining so this passed with a breeze, if it had been raining this might have gone very differently! We arrived at the gates to the grounds and having had our bags searched we made our way to Henman Hill to soak up the atmosphere and of course drink Champagne (remember to take some with you as its expensive there and you’re allowed one bottle per person) before play started on Centre Court at 1 pm.

Having finally (!) found our entrance for Centre Court we realised just how close we were, 2 rows from the court and in the East Stand- which of course meant all day sunshine (and rather burnt shoulders!!) First up was Djokovic against Ward (GBR) who both put on a fantastic opening match and started the afternoon with a fantastic atmosphere– if you have ever seen Djokovic play you will know what I mean! There was some amazing support behind Ward but he was no match for Djokovic and was defeated in 3 straight sets but not without putting on a good fight and some fantastic points.

Next up was the Ladies – Muguruza v’s Giorgi which turned into a very close and tense match but sadly Giorgi was defeated by the French Open Champion’s skills shining through. Having been sat there for quite a few hours by this point it was time for a Pimm’s… which was £8.50 a glass no less (!) but Pimm’s is always worth it! We settled back into our seats for the closing match of the day, which was the famous Rodger Federer against Guido Pella, which saw 2 sets ending with tie breaks, but Federer came out with a win as the champ he truly is.

Around 8:30 pm the match ended and time to head home and make the journey with the masses back to the tube, but what a great day it had been. Delicious Pimm’s, Champagne and food, amazing tennis played by world champions and the sun shined to top it all off!

Remember next year to apply for the ballot as there really is a chance you can be lucky enough to get some tickets…. 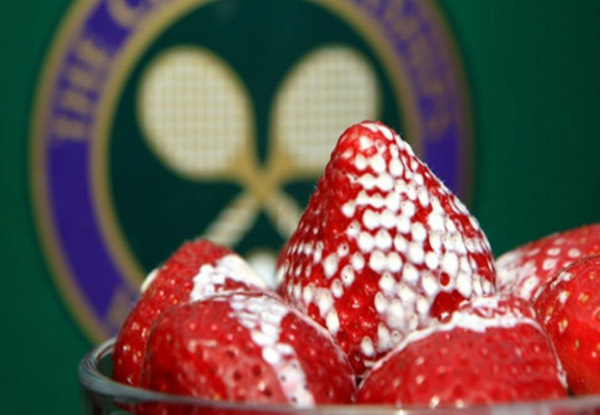 If you haven’t managed to get tickets this year, there are still plenty of other places where you can go to soak up the atmosphere.

They will be serving a cocktail menu inspired by The Championship as well as offering a ticketed event to watch the Men’s Final. Tickets include a four course menu especially designed for this momentous day.

Enjoy the tennis in these lovely gardens where you can sit back, relax and enjoy all their food and drink stalls. A perfect British summer’s day!

What more could you want, watching the tennis on a big screen surrounded by stunning London backdrops. You can bring your own food and drink, and cheer on the tennis pros along with many other Londoners. Win or lose, you’ll be in it together.

This is a probably the most quintessentially British place to watch the tennis. Their courtyard is adorned with big tennis balls, their big screen takes centre stage and of course everyone there has a glass of Pimm’s in hand. They even have a special menu for the Men’s Final (http://www.bluebird-restaurant.co.uk/wp-content/uploads/sites/3/2016/05/Wimbledon-mens-final-menu.pdf)

We have another big screen for you to visit in King’s Cross. A handy location with lots of street food and Wimbledon themed food to choose from.

Do you have time to kill whilst waiting for your train? This big screen at Paddington will be showing all the matches live on their big screen across the 2 weeks!

Grab you blanket and picnic, and come down to the Duke of York Square to watch the Men’s Semi-Finals and Finals. A fun and relaxed atmosphere!

There are lots going in London surrounding Wimbledon so make sure you check them all out – you don’t want to miss out on the action and have to wait until next year to get on the tennis hype!

We are still here!

We wanted to pop up to say Hello and let you know we are still here. We have been working hard remotely during lockdown. If you are needing a candidate or are a candidate needing a job, please feel free to browse the website or email us at [email protected] or call 020 7589 8807.